Which are the options for treating prostate cancer

The various treatment options for patients with diagnosed prostate cancer:

It is important that patients are aware on the various treatments and should feel comfortable discussing them with their urologist or oncologist. Whatever treatment the patient undergoes, he should have ongoing observation, which may include a PSA blood test, a finger scan, and a bone scintigraphy, computed tomography, or plain x-ray as long as there is clinical evidence.

Cancer may be discovered accidentally, during an operation for the removal of the prostate because it blocks the flow of urine. It may also be detected during a biopsy undertaken because of high PSA, without the patient having any symptoms. The appropriate treatment then is close monitoring, meaning that (a) the patient is over 75 years old and (b) the tumour characteristics are such that they classify him in the group of the so-called «friendly» prostate cancers that do not develop.

Radical prostatectomy is a surgical operation with the aim of removing of the whole prostate and the seminal vesicles. This surgery can be done with an incision in the lower abdomen or with an incision between the anus and the scrotum. These are complex, major surgeries that require admission to a hospital/clinic for approximately one week. This operation should not be confused with the usual prostatectomy, which is performed with the transurethral route, because it blocks the flow of urine, only part of the prostate tissue is removed, leaving behind the larger part of the gland.

In radiotherapy high energy radiation is used, which aims to destroy the cancerous cells, leaving the healthy cells intact. It can be used in two cases: (a) to treat early-stage cancer, which is confined to the prostate gland or surrounding tissues, and (b) to treat tumors that have spread to the bones and cause pain. Radical radiotherapy of tumors located in the prostate can be effected in two ways, either as external radiation, or by implanting radioactive particles in the prostate (Brachytherapy). In external radiation, the rays are directed by a machine to the prostate, as in the X-rays. The treatment is applied for five days a week for 4 – 7 weeks and the patients come as outpatients. If radiotherapy is applied to treat the bones, then only a small number of treatments are needed.

Radical radiotherapy may also be applied by using radioactive particles which have approximately half the size of the grain of rice. These particles, usually 80 – 100 in number, are inserted through needles which pass through the skin, behind the scrotum and in front of the rectum and then into the prostate. The procedure is carried out under general or partial anesthesia of the patient. It has the advantage of being either a day treatment or an overnight procedure, with patients returning to their daily habits and activities very quickly. In the meantime, there is a constant research and invention of new more effective methods of Brachytherapy and Dr Zamboglou has analyzed some of them during the meeting organized by Europa Uomo 2009. The same treatment method is applied by Dr. Panos Koutrouvelis who excels in America and Greece.

When cancer has spread beyond the prostate to the lymph glands or the bones, hormone therapy may be very effective in shrinking the tumor and reducing the complications of the disease. It does not offer a cure, but it may keep cancer under control for some years. Some patients also receive a series of hormone treatments before undergoing radical radiation therapy. This is useful if cancer has spread outside the prostate gland (in the surrounding tissue) but has not as yet reached the lymph glands and the bones. Hormone therapy may continue from 1 to 3 years after the end of radiotherapy in locally advanced cancer. There are many ways of delivering hormone therapy.

(ι) Surgical Operation. The testicles which produce testosterone can be removed surgically through a small operation known as “orchidectomy” that can be done in one day. However, surgery is irreversible and is an option that some men find unacceptable. It is not true that men after such a procedure may show signs of femininity.

(ιι) Treatment by injection. The injection of an agent called «analogue LHRH» has a similar effect as the orchidectomy in the production of testosterone, as the testicles remain in their position. This injection is given every one or three months by the doctor or a nurse. Because there may be an initial increase in testosterone after the first injection, the use of anti-androgens in pill form for two weeks is necessary to stop breastfeeding and impotence are common side effects of such treatments.

(ιιι) Antiandrogens (pills). They are divided into those that prevent testosterone production and those that prevent its action. This treatment involves taking a pill daily. Certain types of these drugs have both effects. Drugs that have this dual effect can be used on their own to treat prostate cancer, but they tend to cause impotence and lack of sexual desire more frequently than the drugs that stop testosterone. The group of drugs with this action is usually used to patients that have undergone orchidectomy or to those who receive regular LHRH injection. The antiandrogens pills often cause nausea and diarrhea or rarely reversible liver damage. 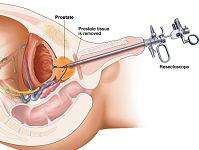 Cryotherapy destroys the carcinogenic cells by freezing them and this is done by using ultrasound through the perineum. The needles used deposit argon gas or liquid nitrogen on the targeted area and freeze the tissue into small ice balls which then melt killing the cells and leaving only scar tissue behind. The patient does not feel any pain; however, some time is needed so that the affected tissue sloughs. Patients will have a catheter for weeks or even months after the surgery. Erectile dysfunction can occur in up to 90% of patients who have undergone this method as well as urinary incontinence. Patients should not have cryotherapy if they have and can maintain erectile capacity. Cryotherapy is an option for patients who develop cancer after having external radiation.

Chemotherapy includes drugs that kill the cancer cells and prevent their development. It is a second- or third-line treatment for patients with advanced prostate cancer, which can no longer be controlled by hormone therapy. These patients almost always have bone metastases. There is a number of various factors available today and new drugs will soon be available that may be effective in controlling the disease at its more advanced stages.