The prostate is a small gland, having approximately the size of a nut, which is exactly under the urinary bladder. Its growth is controlled by testosterone, the main male hormone that determines the development of male characteristics. The biggest part of testosterone is produced by the testicles, while a small percentage is produced by the two adrenal glands, located one at the top of each kidney.

The hormone enters the circulatory system and from there is directed to the prostate. There it is converted to dihydrotestosterone, a more active form, which stimulates the growth of the glad. The prostate gradually grows with age, leading to symptoms such as decreased urine flow and a feeling of incomplete emptying of the bladder, frequent urination, nocturia, dysuria, difficulty in starting urination etc. Usually this enlargement is mild (not carcinogenic).

Normally in prostate cancer, as in the rest of the body, there is a constant recycling of dead cells, during which the new ones replace the old ones. In the case of cancer, the equilibrium between new and old cells ceases to exist, with many new ones being produced and old ones living longer, as the process of cell death has been disrupted. The formation of malignant cells is known as “prostate cancer”. They differ from the mild form of hypertrophy in that the cancer cells can spread to other parts of the body (metastasis).

Prostate cancer in its early stages causes no pain or other symptoms. That is why the indication of its presence can not be done by waiting for symptoms because then it could be too late. We need some form of warning. Prostate Specific Antigen, known as PSA (Prostate Specific Antigen), is one such warning. PSA is a molecule produced exclusively by the prostate or prostate tissue. Thus, a normal prostate produces PSA, a small amount of which is poured into the bloodstream from where it can be measured via a laboratory PSA test.

Measuring PSA is a very simple process. The doctor or an assistant, after taking some blood, sends it to a hematology laboratory. The amount of PSA will be measured in the laboratory and the result will be sent to your doctor. Your doctor will compare the results with the PSA of a large number of patients with a confirmed diagnosis of prostate cancer and men who do not suffer with prostate cancer to decide if your case is a cause for concern. But your PSA could be higher even if your prostate is swollen, which is a common abnormal condition known as benign prostatic hyperplasia (BPH), or even higher, even if there is an infection in the prostate. Thus, a high PSA, by itself, is not evidence of prostate cancer.

How is prostate cancer diagnosed?

The PSA test is similar to body temperature, where we know we have a high temperature but do not know why, or what is causing the problem. If your doctor suspects that the cause of the abnormality is your PSA and suspects that there is prostate cancer, he or she will refer you to a specialist for a histological examination (Biopsy). The pathologist will examine under a microscope samples of prostate tissue collected for the biopsy. It is the pathologist who will decide if there is prostate cancer and if this tumor is dangerous.

Am I treating prostate cancer or not?

If your doctor has finally diagnosed prostate cancer, he or she will invite you to talk and suggest the type of treatment that is right for you. All men are different from each other, so as is prostate cancers and even its treatment methods. Your doctor will process the various information he has about you, such as your age, your other illnesses that you may have, your future plans and more. With all this information in mind, you will ultimately decide, after of course discussing the issue with your family and friends, what decision to make.

Yes, prostate cancer can be cured if diagnosed early. In order to establish its existence early we must look for it. Studies in Europe have shown that using PSA as an early indication leads to a reduction in prostate cancer deaths and fewer prostate cancer patients with metastases to other organs in the body. These are indeed very encouraging results. The other side of the coin is that we know that many cases of cancer detected by PSA testing are negligible and do not require any treatment. The side effects caused during the treatment could not have any pleasant side effects. Sexual impotence and general weakness are some of them, so think carefully before deciding how to proceed.

What can you do?

First of all, learn more about your prostate, because a well-informed man can make the right decisions. Then there is your age and your family tree. If you are young, forty years old, you do not have to worry. At this age prostate cancer is virtually unknown. There is a genetic link between your family. If your father, brother or grandfather was diagnosed with prostate cancer at an early age and may have died from it, then you are more likely to have it at a relatively young age. If this is the case for you, then you should take your first PSA test in your forties. Your doctor, based on the results of your examination, will tell you when to do the second test, in a year or even five years. If you do not have a family history, you could have your first PSA test in your fifties. Again, your doctor will prescribe the next test based on the results of the first test.

The cancer cells spread outwards with an immediate growth to the neighboring parts of the body, through the gland capsule, such as in the seminal vesicles and the urinary bladder. They can sometimes spread through the circulatory system and then be implanted and multiplied in the bones of the spine. Finally, the cells can spread through the lymph nodes, to eventually empty back into the circulatory system. As a result, lymph nodes can become infected with cancer cells as they try to clear the lymph.

In Cyprus prostate cancer is one of the most common cancers in men and affects around 300-350 patients each year. A man has a 10% chance of developing prostate cancer and a 2% chance of dying from it. Indeed, it is rather unlikely for a man to live for many years, without experiencing prostate cancer. However, this does not necessarily mean that discomfort appear. Thus, several die, who have not been diagnosed in their lifetime because they had never had symptoms.

There is no definite answer to this question. However, there are some factors that could increase the chance of developing prostate cancer. First-degree relatives of prostate cancer patients have an increased risk of developing the disease themselves, especially if a sibling or the father has the disease. Prostate cancer is more common in African American people and less common in China. There is also an association with people living in urban areas who are exposed to air pollution, as well as those who consume large amounts of fats.

Most of the times there no symptoms associated with the early stages of prostate cancer. As the disease progresses and the tumor grows, it may press on the urethra, which passes through the gland, blocking the flow of urine during urination. In this case the patient may notice a weak and intermittent flow of urine, which may require more effort. Also, after urinating, he may still have the feeling of incomplete emptying of the bladder, frequent urination, dysuria, nocturia etc. However, these are not particularly prostate cancer symptoms, as they occur more often in cases of normal gland enlargement (hypertrophy).

Blood in the seminal fluid may be a sign of prostate cancer, but it is still a common phenomenon which is not necessarily associated with malignancy. If the tumor has spread to the bones, it may cause pain. The most common place for this to appear, is usually the spine. Usually, patients with symptoms such as those mentioned earlier visit their doctor or GP. Subsequently, and after the initial examinations, patients with suspected prostate cancer are referred to the urologist. Judging from the symptoms and the laboratory tests he will decide and proceed to a prostate biopsy (usually a painless procedure). After the microscopic examination of the biopsy specimen and if the diagnosis is cancer, further treatment will be decided jointly with the radiotherapist oncologist. The treatment dependents solely on the stage of the disease in conjunction with the general condition of the patient and his age. The choice of treatment is always based on the patient’s preference. 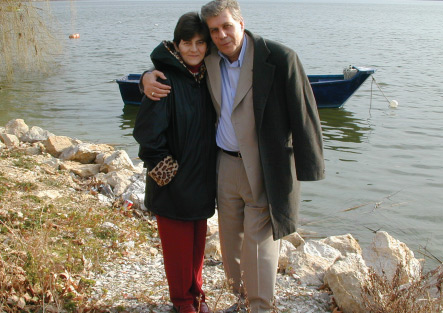 How does one deal with the diagnosis?

The diagnosis of prostate cancer can change the lives of both the patient as well as the family. It is natural for the patients and their loved ones to feel scared, angry, or depressed at times. These are normal reactions for patients, and most of whom can be helped when they share their worries and feelings with others. Patients may feel more comfortable discussing their problems with other patients suffering from the same disease. However, they must keep in mind that there can never be two patients or two tumors at the same time. Each patient’s personal doctor is the most appropriate person to explain their condition to them, so as to avoid trivial things that lead to sad and disturbing thoughts. Although prostate cancer is a serious disease, it can be treated very effectively or cured if treated quickly.